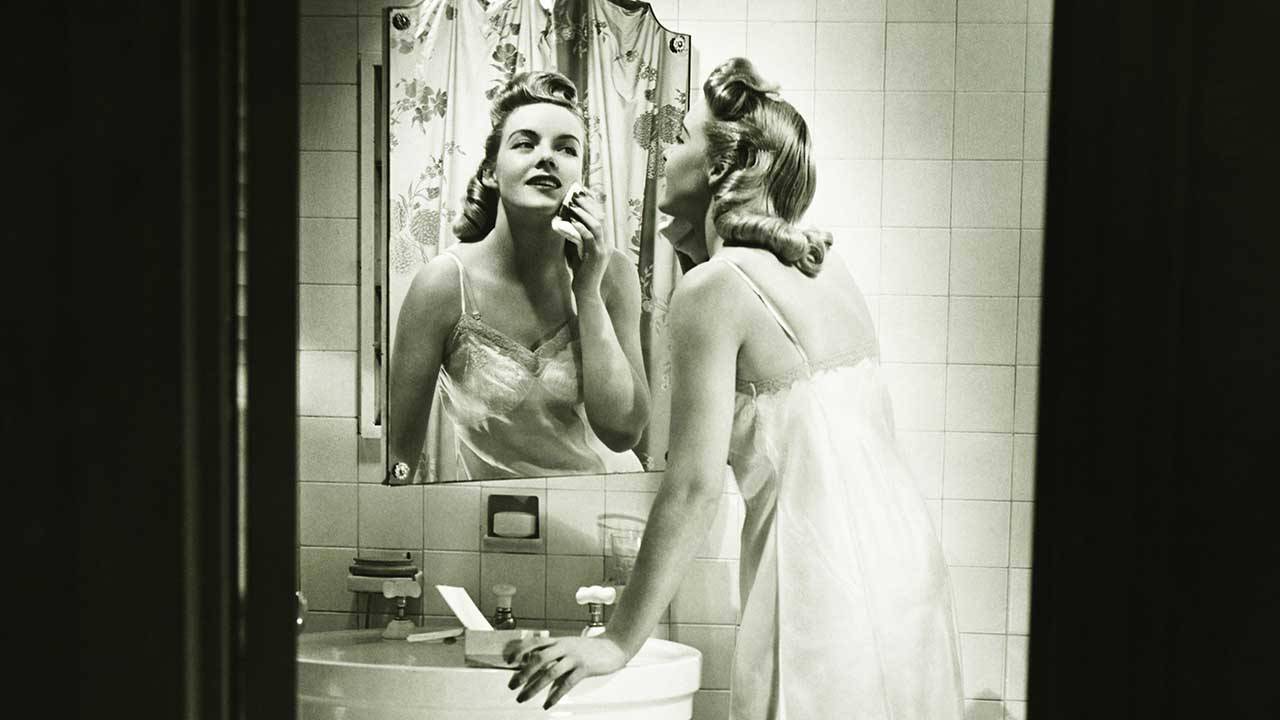 You’re probably already familiar with makeup trends through the years—the bright, bold eye makeup of the ‘80s and the grunge hairstyles of the ‘90s among them—but have you ever wondered about the history of skin care? From the invention of SPF to facial cleanser innovations, today, we’re taking a look back at American skin care through the decades, starting with the ‘20s.

The beginning of this decade, often referred to as the roaring twenties, signified a time of change for women, both in their newly-acquired voting rights and American fashion and beauty norms. The Victorian era of pale, covered-up skin and minimal face makeup were out, and a more vibrant look was in. As such, women began taking better care of their skin. By this time, regular bathing had also become normalized, as it was during the early twentieth century that Americans started to become more concerned with personal cleanliness. Baths even started to be used for relaxation and comfort, although they weren’t quite as extravagant as the baths we pamper ourselves with today—aka there were no bath bombs involved.

An overall bronzed look became fashionable in the roaring ‘20s, and by the 1930s, women all over America wanted to debut a light summer tan year-round, according to the National Museum of American History. Cosmetics companies took note and followed suit, launching face powders in darker shades meant to provide a barely-there tan. Even L’Oréal got in on the action, introducing Ambre Solair, a tanning oil with sun protection that launched in 1935.

Editor’s note: You may not be able to get a tan courtesy of Ambre Solair today, but the beauty industry has continued to produce ways to achieve a gorgeous glow. Nowadays it’s all about self-tanner, like the L'Oréal Paris Sublime Bronze Self-Tanning Water Mousse.

Following in the footsteps of the elaborate skin care routines that became the norm during the 1930s, women in the 1940s began to prioritize taking care of their skin over everything else. The use of cold cream became very popular, which women would often leave on their complexion overnight rather than washing off. Facial moisturizer also saw a rise in popularly, and women would layer on rich, thick creams that promised baby-soft skin.

DIY beauty didn’t just become popular over the last few years. Back in the ‘50s, many women took a DIY approach to their skin care routines, using products we consider multi-use staples today, like baby powder and petroleum jelly.

Editor’s note: Want to live like the generations of women that came before you and get crafty with your beauty routine? While we don’t recommend mixing up your own face masks, you can exercise your DIY-loving side with a little help from our DIY facial guide: 7 Steps for a DIY Facial.

Now, you likely use a sunscreen (or a moisturizer) formulated with SPF every day, but it wasn’t until the ‘60s that sunscreens with SPF were introduced. Still, even after this launch, the knowledge of the potential for sun damage was not what it is today. It wasn’t until much later—in the ‘90s—that it was known that not only UVB rays, but UVA rays too, put you at risk for cancer and skin aging.

The 1970s emphasized natural beauty, and with women wearing less makeup than in decades past, the need for more skin care products boomed. Natural ingredients emerged in many skin care and cosmetic launches to suit America’s growing taste for organic products.

Anti-aging skin care products really made a name for themselves in the ‘80s. In fact, according to the National Center of Biotechnology Information (NCBI), it was in the ‘80s that tretinoin (a powerful prescription skin care product) was first recognized for its potential in the treatment of aging. Over the counter anti-aging products during this time were often formulated with collagen and other extracts and were used to diminish the look of fine lines and wrinkles. Women also began exfoliating regularly to help stave off signs of aging and promote a youthful appearance.

Of course, aging wasn’t the only skin care concern being addressed during this era. Acne cleansers also boomed onto the scene, and the tingling, stinging sensation of many of them was a staple of the time.

Editor’s note: Exfoliating isn’t something you should leave in the past, so, if you’re not exfoliating your complexion with a face scrub regularly, it’s time to start. If you have sensitive skin, reach for the L'Oréal Paris Pure-Sugar Nourish & Soften Cocoa Scrub a few times a week to help slough off dead, dull skin cells that can accumulate on your skin’s surface.

You may have heard a lot of buzz about alpha hydroxy acids lately, but they aren’t exactly new. According to the NCBI, it was back in the mid-1990s that the anti-aging effects of AHAs were first recognized.

Editor’s note: If you’re behind on this particular trend, let us get you up to speed with our article, What Are Alpha Hydroxy Acids?

Tanning is something that pops up time and time again throughout history and the early ‘00s were no exception. It was during these years that everyone from pop stars to high schoolers were partaking in fake baking. Thankfully, towards the end of the decade, people became more knowledgeable about the dangers of tanning beds and spray tanning become increasingly popular.

Skin care itself has become majorly trendy in recent years, making it hard to pick just one thing of significance to point out from the 2010s. However, if you take a deeper look at the many things that have trended over the past few years, a pattern is obvious. Many of the biggest trends are ones we’ve adapted from other cultures and countries around the world. From Japan to Germany to Iceland, so many of our favorite skin care trends at the moment are ones we’ve picked up in other places.

Interested in learning more about beauty trends through the years? Next, read our article The Biggest Makeup Trend From the Year You Were Born.